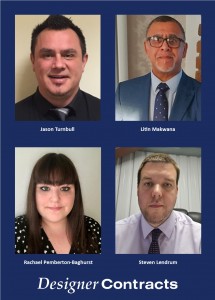 Designer Contracts, the UK’s largest flooring contractor, has relocated its Slough office to larger premises in Reading and made a raft of key appointments across the company.

The new, 5,017 sq ft East Woodley office and warehouse in Reading now forms the regional headquarter base for Designer Contract’s Western Counties area – one of 15 regional offices around the UK.

Said commercial director Louise Walters: “The move represents a significant investment in the future of the company, along with a number of senior appointments and promotions.”

Litin Makwana comes from a retail background of some 30 years, including working for Dreams, the Steinhoff group and Hilary’s Blinds. He came to England in 1970 from Nairobi Kenya and currently lives in Luton Bedfordshire.

Rachael has been with Designer Contracts since 2010 when she started in the show home and design department and has worked her way up through the company through a wide-ranging number of roles.

She is married, lives in Nottinghamshire and said: “In my new role I am excited to unite and oversee the compliance, audit and learning and development departments to drive improvements in the performance of our people, systems and process.”

Jason Turnbull joined Designer Contracts in 2018 after more than 20 years in sales and management. He is based in Leeds, is a keen Leeds United and Rhinos supporter – and following his promotion to area manager, hopes to build the new Yorkshire region into one of the company’s most successful business areas.

Steven Lendrum is based in North Devon and, after working his way up to store manager with ASDA, spent five years in store management with Carpetright.

About the Author: Laura Sheeran