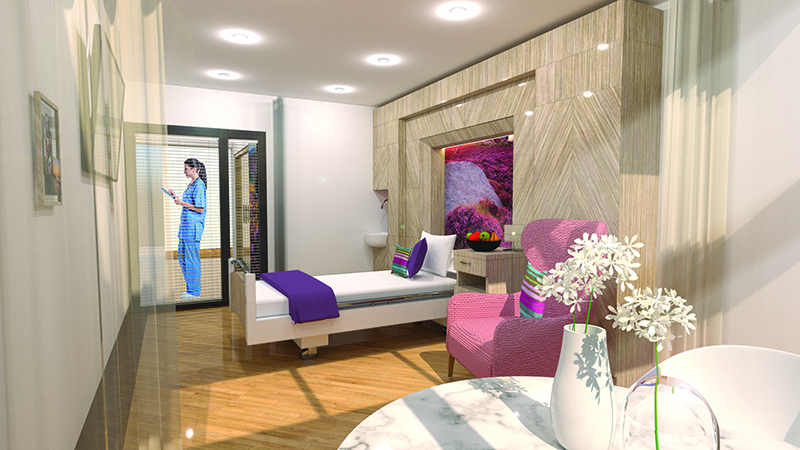 Ashgate Hospicecare are thrilled to announce that one of their amazing supporters, Designer Contracts, are supporting the Hospice’s Three Bedded Bay Appeal through their amazing gift of £100,000.

Designer Contracts, the UK’s largest flooring contractor, have once again gone above and beyond to support their local Hospice, helping transform the Hospice’s Three Bedded Bays by sponsoring a bay which will create a homely, welcoming space at the Hospice for patients and their families.

This is not the first time Designer Contracts have made a huge difference to patients at Ashgate Hospicecare. Last year, the Chesterfield based business completely redesigned and rejuvenated the Hospice’s family room, creating a home from home for patients and families of North Derbyshire.

At Ashgate Hospicecare, we believe every person matters and they matter until the end of their life. The time that patients and their families spend with us will often be the most precious days and nights. However, for many of the people who need to be on our Inpatient Unit, we are no longer able to offer them the privacy and dignity that they deserve and that we would all want for ourselves or for someone we love.

Thanks to this amazing gift, we will be able to give our patients and their families a spacious, private and dignified environment when they need it the most. On behalf of everyone at Ashgate Hospicecare, thank you so much!”

Peter Kelsey, Chief Executive at Designer Contracts, said: “Designer Contracts are delighted to be able to continue to give their support to Ashgate Hospicecare and their patients and families.

Everyone we have met that’s associated with the Hospice has been so dedicated and caring, everyone does such wonderful work. The refurbishment plans that we have been able to contribute to will make even more of a difference to their patients, so we are so happy to be able to be a part of that.”

Greg and Lauranne share what Ashgate Hospicecare meant to them when Lauranne’s sister, Julie, came to the Hospice. Julie had brain cancer and as she became more poorly, her family cared for her at home. But when Julie’s symptoms became unmanageable for them to cope with, she was admitted to a single bedroom on our Inpatient Unit at the Hospice.

They said: “The Hospice provided us, as a family, with so many precious moments together. We feel incredibly lucky that Julie was able to have her own bedroom. I can’t imagine half of these moments being possible in a bay. We wouldn’t have all fitted around the bed, that’s for sure.”

Want to find out more about how you could support this amazing project and how your support could make a difference to the lives of local people? Just call Ali, Capital Appeals Manager on 01246 567250 or email alison.ward-foster@ashgatehospicecare.org.uk.

About the Author: Louise Walters