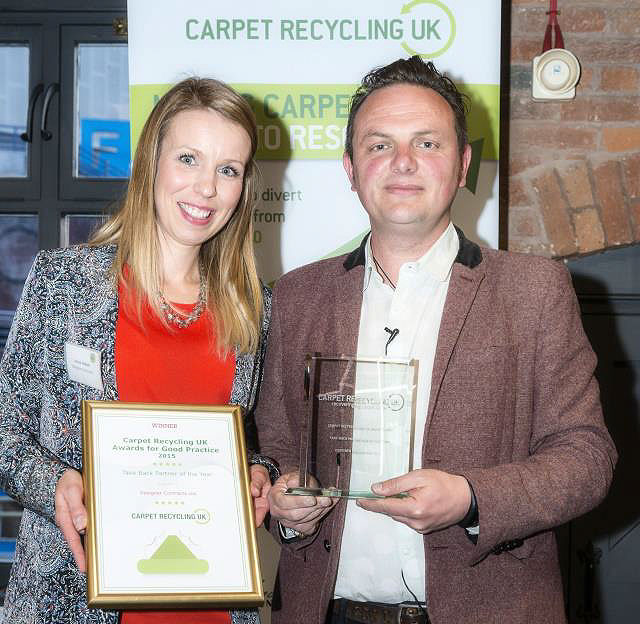 Designer Contracts has been awarded ‘Take Back Partner of the Year’ by Carpet Recycling UK (CRUK) at the annual awards and conference held in Birmingham.

Louise Abbott, Designer Contracts’ merchandise and marketing manager was also honoured with highly commended for Recycling Champion of the Year, which is for an individual who has shown commitment to increasing carpet recycling at their organisation.

Laurance Bird, Director of Carpet Recycling UK said: “We are really pleased with all the hard work Designer Contracts has put in to its recycling scheme and the results speak for themselves. The company very much deserve the Take Back Partner of the Year and the highly commended recycling champion titles.”

The company initially trialled a recycling scheme, spearheaded by Louise in conjunction with CRUK, at their Central Region based in Chesterfield before rolling it out to all 12 of Designer Contract’s regional offices.

The scheme works by diverting 90% of its fitter’s unfitted carpet into felt underlay. What isn’t turned into underlay is used in the equestrian sector for arena flooring. This innovative scheme has already saved over 250 tonnes of fitters’ waste carpet from landfill in the last year.

Said Louise: “We’re delighted to have been recognised for our recycling scheme and have been pitted against some tough competition. We’re helping the environment by transforming our waste into a sustainable solution and from the customers’ point of view, dealing with a contractor or manufacturer that recycles materials is increasingly beneficial.”

Fitters are supplied with a builder’s bag to fill with unfitted carpet to drop off at their nearest Designer Contracts regional depot. It is then taken to an approved recycling facility before being transformed into felt underlay. Any waste created is removed from site and recycled wherever possible. Designer Contracts does not use customers’ skips.

In-house transport fleet Our service levels are enhanced by having our own transport fleet. We realise that a delayed delivery can have a serious knock-on effect so we are organised to meet the most demanding delivery schedules. There isn’t anywhere in the UK we can’t get to quickly.
Toggle Sliding Bar Area
This site uses cookies: Find out more click here.