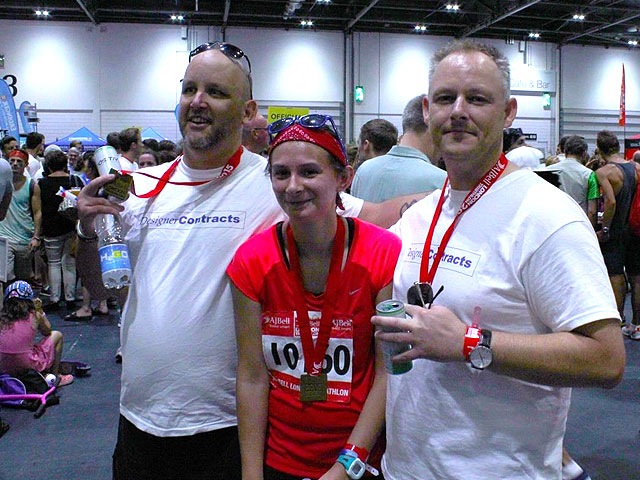 A fearless team of athletes from the UK’s largest flooring contractor Designer Contracts’ Thames Medway region, took part in the London Triathlon held at the Excel Centre on 8 and 9 August 2015 to raise money for Great Ormond Street Hospital.

The AJ Bell London Triathlon is the world’s largest triathlon, combining swimming, cycling and running. It is an incredible challenge, taking in some of the capital’s famous landmarks. It attracts over 13,000 triathletes of all abilities and 30,000 spectators cheering them on.

The team relay of Simon Lovett, Sofia Byerley and Paul Slade devoted their time and efforts and completed the Olympic distance of 1.5km swim, 40km bike, and 10km run, with each member of the group completing one of the three disciplines.

Led by Paul, Designer Contracts area manager from its Thames Medway region, they have so far raised £555 for Great Ormond Street Hospital. All proceeds will be going towards the redevelopment of buildings around the hospital.

Paul said: “It was a great day, even if it was hard work. We set ourselves a target time of four hours, but completed the whole thing in three hours, 33 minutes, which was a fantastic achievement for us. We were delighted to be able to participate in this event to contribute towards a better society”